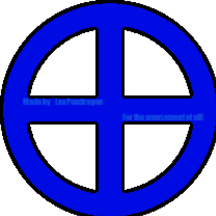 @grimmware @thegibson I love the magical sigil on the desk, that is a great place for it! Can I ask what that one is?

@LexPendragon @TheGibson That’s the sigil of Marbas from the Ars Goetia in the Lesser Key of Solomon (or Lemegeton), he “answers truly on hidden or secret things, causes and heals diseases, gives wisdom and knowledge in mechanical arts, and can change men into other shapes.” So good for security work ;)

I think I need to look into this, I recent got a work related email from someone who's name had shortened weirdly to "Barbas". 🤔

@grimmware @thegibson Reading up on him, He is the "Great President of Hell governing thirty-six legions of demons"

Wow, and you think managing your own employees would be difficult. Can you imagine this guy's headache? Talk about worst jobs ever. Not only are you working HR, you're working HR for literal demons. In Hell.

Someone get that lion a coffee!

@LexPendragon @TheGibson And associated with Mercury, also appears in Le Dragon Rouge as a minor spirit under Lucifuge Rofocale (first image is the Ars Goetia in the Lesser Key of Solomon, second and fourth are from The Complete Magician’s Tables, third is Le Dragon Rougue a.k.a. The Grand Grimoire).

@LexPendragon @TheGibson (I actually have the Marbas sigil tattooed over my left nipple - don't get your nipples tattooed, it fucking hurts)

@grimmware Ouch! Was that part of a bargain or was it just because you though it looked good? (If you don't mind me asking.)

@LexPendragon I've got a full Lurianic Tree of Life tattooed down my torso and Hod (also associated with Mercury, but also with intellect and ritual) happened to be over my left nipple and the association with Marbas was one that resonated with me so I got that :) I have the Secret Seal of Solomon (https://en.wikipedia.org/wiki/File:Goetia_seal_of_solomon.svg) on the other one.

The Tree of Life has been used extensively in a very syncretic style over the centuries, with people building associations with different forms of esotericism, mysticism and myth so I kinda did the same thing.

I don't, personally, believe in the demons themselves so much as the power of symbolism and mythology and how it relates to human perception and learning, and as a system of archetypes for applying broadly to understand both internal and external effects.

I also think it looks good ;)

@LexPendragon Heh, yeah one of the hilarious things there is that the Major Arcana map to the 22 letters of the Hebrew alphabet and therefore to the paths on the tree but nobody seems to be able to agree *how*. I need to sit down and form my own opinion on this.

I think the Minor Arcana aren't quite so contentious though so Marbas would associate (via The Tree) to the 3s across the suits, depending which of the "4 worlds" of The Tree you're looking at.

Qualitatively I'd suggest that Marbas would associate with Swords as a suit (being more intellect based) but then you'd end up with like, the 3 of Swords which just doesn't seem to have anything to do with the original demon so

Honestly though it's all just a bit of fun and often tenuous at best anyway :)

@LexPendragon certainly fun to chat shit about on the internet with random strangers ;)

@grimmware Swords tend to be more.. well, sword and bravo in my experience. I would have expected Coins/Pentacles since being hidden secrets and even being "President" sounds more like a managerial/accounting function. Three of Coins certainly would line up with that...

@LexPendragon Ah I never thought about associating via the titles! Certainly matches better to the mechanical arts too.

I tend to associate swords with intellect because to me intellect is the cause of anxiety and the suit of swords is HELLA ANXIOUS.

This is what I love about the whole field though - it's always an interesting topic of conversation because the lived experiences and associations are different and all valid person-to-person, but the interest in the archetypes is a basis of commonality :)

@grimmware I heartily agree. What comforts one person would make another nervous. I am sure that a battle hardened knight would feel relaxed with a sword, but a computer expert would be relaxed writing code for work (Pentacles). Meanwhile, swap roles and you'd get anxiety from each of them.