Yeah, I get it, it's a Piece of Heart

@Tak Darksiders is nothing if not honest about its influences =P

@witchfynder_finder Yeah, I just got the boomerang…

@Tak Just wait, it gets even better =P 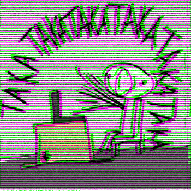 I love the power glove. It's so bad.

Finally, I can move the rocks blocking the path to Death Mountain!

So now I've got the boomerang and the power glove, and I can see things for the hookshot everywhere… where do I find the ocarina?

Wishing for the boots from Twilight Princess right about now

Perhaps some sort of hooked … shot – surely nobody has done that before!

Ok, this is absolutely ridiculous

Darksiders is a pseudoChristian-apocalypse-themed 3d Zelda game with God-of-War-style combat grafted on.

I found that combat a tedious slog, particularly when having to trudge back across already-explored areas. There are only a handful of different enemy types, so once you've seen them all, it's just pummeling and pummeling mob after mob of the same things.

The boss fights, however, were inventive and fun, and made use of the new mechanics from their areas.

The dungeons were the stars of the show for me: they're intricate, packed with fun puzzles, and each one introduces at least one new mechanic.

I'm looking forward to trying Darksiders II, but I'm definitely going to try setting the difficulty to easy in hopes of alleviating some of the hack and slash drudgery.